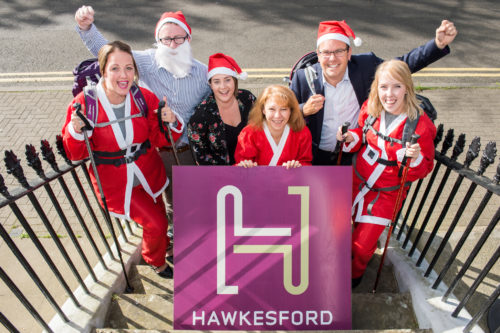 A brave six-strong team from our Leamington office will be donning Santa outfits this February (re-arranged from December because of bad weather on the original date) and tackling Mount Snowdon in aid of a local charity – Young People First. And if that’s not daunting enough, the next day we’ll also be taking on ‘Velocity’ – the longest zip line in Europe and the fastest in the world …reaching speeds of 100mph!

Young People First works with vulnerable and disadvantaged young people across Warwickshire and the West Midlands, and their youth workers offer support and guidance to hundreds of young people every week.

As a local independent business we’re particularly proud to be a long-time supporter of a locally-run good cause. James has led their Christmas auction eight times and taken part in at least ten of their golf days – even winning a couple.

As well as the Santa’s Rock Snowdon Challenge we’ll also be donating ten per cent of all our fees to the charity between November 13 and December 13.

Our six thrill seeking mountaineers are James Hawkesford, Pauline Carrera-Silva, Nikki Raby, Carly Devis, Becky Coyle and Rory Noonan. Some of them prepared for the Santa’s Rock Snowdon Challenge by testing their legs on the Broadway Tower recently.

Good luck to our colleagues and please join us in supporting this fantastic charity, either by visiting https://localgiving.org/fundraising/nikki2017/ , calling into our office or contacting us on 01926 430553. Remember we’re donating 10 per cent of all our fees – including properties put on the market, letting fees and survey fees.

Many thanks for your support.